Fungus gnats and flies develop in the cultivation chambers. Rarely, but there were sightings of insects by using no high-quality casing soil. In the warm season, they often fly when loading the compost or casing soil in mushroom cultivation hall. Obtained odor mycelium and compost, they fly from the street (flying in calm weather to 5 km.), Corridors, halls other cultivation and immediately females lay their eggs in the compost or casing soil. It is the most dangerous period. 4-8 days the mycelium is beginning to shift from grain to compost and active growth, and in that time has come and the larvae begin to eat the mycelium, not giving him a chance to colonize the entire compost. The photo shows the terrible consequences of the penetration of a large number of lice on the day of loading of compost. By the 19th day of incubation, the larvae were so many that apply the casing soil does not make sense, the mycelium is almost all destroyed. 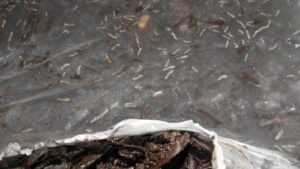 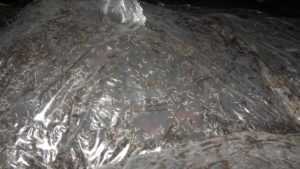 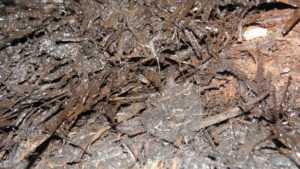 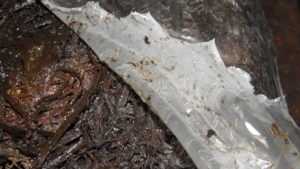 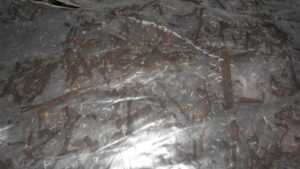 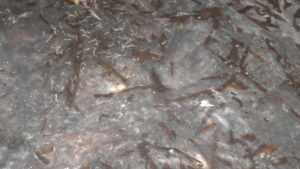 Signs of the presence of insects in the halls of cultivation: 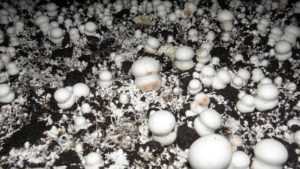 Fungus gnats family Stsiarid (Sciaridae) develop from eggs. After 5-10 days of brilliant white oval eggs larvae appear shiny black head with a length of 0.5 cm. It is at this stage larvae cause major damage to mushrooms and damage mycelium gnaw its strands connecting the nutrient substrate fruiting bodies. The larvae burrow tunnels in the leg, and a hat. In the first case there is a massive loss of rudiments of fruit bodies, in the second – the loss of quality of production, and sometimes its complete destruction. In 8-12 days, the larvae pupate in the substrate, and after 7-8 days from the cocoon fly adults. After this cycle is repeated. 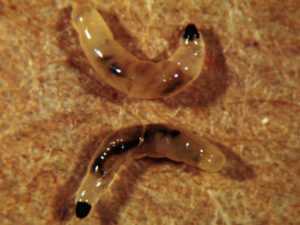 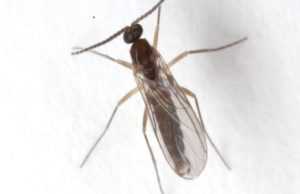 Fungus gnats gall midges family Tsetsidomid (Cecidomyidae) as a result of the ability of orange larvae produce several generations, which izgryzayut legs fruiting bodies, forming a surface channel in them. However, within the fruit body it remains intact and can be used for other purposes. In some cases, the larvae of mosquitoes accumulate at the bottom of the legs of fruiting bodies, podgryzayut connecting strands, whereby there is a mass wilting sporophores. Ultimately, the larvae pupate, emitted from the cocoons small adults. 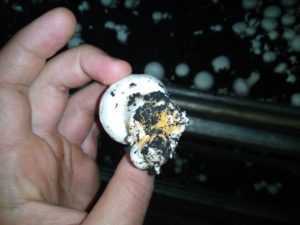 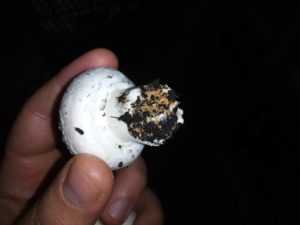 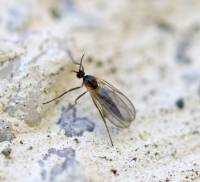 Platypezidae (mushroom flies) family Forid (Phoridae) develop from eggs. One female can lay up to 200 pcs. The larvae emerging from eggs, have a white head and body up to 7 mm in length. In this step, a fly harms fungal culture, gnawing moves in fruiting bodies by breaking their connection with nutrient substrate mycelium and mycelial cord breaking. Adult flies and midge this family Tsetsidomid similar to each other, but differ from midge smaller body size (up to 4 mm in length) and short antennae. 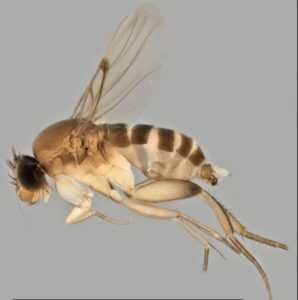 Danger midges and mosquitoes and their larvae in the fact that they eat away the mycelium spread germs and mold spores, fungi spread of the disease, not only throughout the growing chamber, but also can infect the entire production. If you leave the problem unattended, then even had to stop production because the display of insects will be very difficult.

Therefore, manufacturers have to look for ways to deal with these pests to save their crops.

To prevent problems with the insects is necessary to use insecticides against fly larvae, which contribute to irrigation Pokrovki: Nomolt, dimilin, Larvenol, Rimon (. 200-300 MLL 100 liter of water) and insecticides for the treatment premises smoke bombs, against flying insects: Decis, Fastak (20-30 ml per one piece). Fight with the flies need in the complex using drugs against larvae and adults against volatile species, processing possible not only to the growth chamber, but the locker rooms, hallways, utility rooms. Recently, those insecticides which are used to apply a steel mushroom growing is not so effective, because the systematic application of insecticides to one active ingredient, at Pest occurs privykaemost (resistance) to the insecticide action. For the prevention of addiction, it is necessary to change the medication.

Realizing this, many mushroom growers began to go on biologicals, and are increasingly using Nemycel – it nematodes destroy the larvae of fungus gnats.

The nematodes are applied as an environmentally friendly means of combating larvae, flies stsiaridy (Sciaridae). No privykaemost, if you have fly larvae, then every 3 days, you will have 4,000 new nematodes. They do not inhibit the growth of mycelium and operate throughout the growing cycle of mushrooms. Making nematodes with watering, the recommended application rate 2 Mio / m2. After applying the nematodes actively seek out their prey and penetrate them, then feed on the contents of the victim, while stressing the specific bacteria from their digestive tract. These bacteria convert larvae tissue products that are easily digested nematodes. Fly larvae die within a few days.The drug is an environmentally friendly and absolutely safe for warm-blooded animals and humans.

To prevent problems with insects and their control, it is necessary: 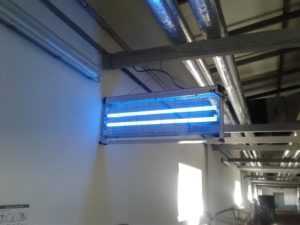 For insect crawling on the walls, it works perfectly plain yellow paper masking tape. Her pieces have to be pasted on the wall near the lights, doorways, near the exhaust channels and tape and then apply a thin layer of horticultural glue (sold in tubes or other containers in parts of the garden, a kitchen garden). This tape is easily torn off before unloading. 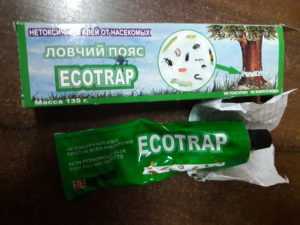 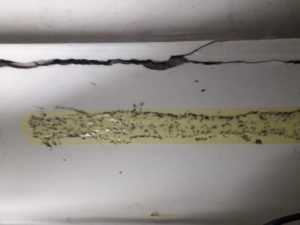 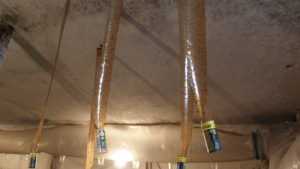 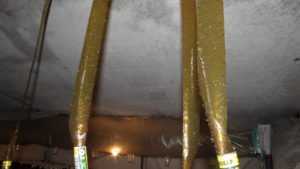 All production waste (roots, fallen compost Pokrovka during loading and unloading) must be fast and as far as possible to take away from the premises. After all processes in the street, to wash away the waste in a closed drain. To this end, the area should be concreted. Steaming waste compost reduces the problems with the choice of coating mixture nasekomymi.Pri need to give preference to certified suppliers.

We must always remember:

Flying or crawling, all the individuals of insects on her body spread across the enterprise mycelium and spores absolutely all pathogenic form of the disease. Their larvae create very big problems. 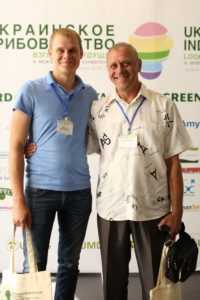