Mikogon (wet rot, Mycogone perniciosa) – a fungal disease, one of the most dangerous diseases that occur in mushroom farms for mushroom cultivation, the control over the appearance and spread of which is very important. 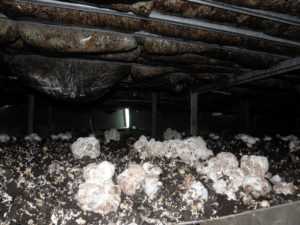 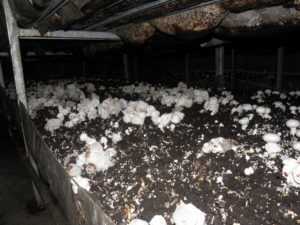 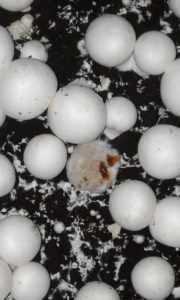 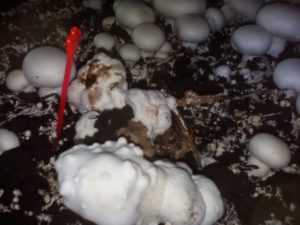 The disease affects mainly the fruiting bodies. (After infection, there are mushrooms that have a thicker stem and underdeveloped hat). At these fruit bodies of a white, cottony mycelium plaque. Then fruit bodies shrink, soften, darkens their pulp and rot, which is accompanied by an unpleasant odor. At this stage the fungus pathogen forms numerous spores which air flows, a curtain, tools collectors, insects and nematodes are spread throughout the cultivation room. Apart from the usual dispute-conidia, under unfavorable conditions, a long time to maintain the viability of chlamydospores. Both types of spores are accumulated in the casing soil (compost less), which serves as one of the main sources of wet rot infection.

Early infection accompanied by the appearance on the surface Pokrovki shapeless body resembling frozen clumps, formless potatoes or clenched fist. In favorable conditions, they reach the size of a grapefruit. Initially, they are covered with a clean, thick white skin. Over time, the surface of the affected fungus appear darkened amber liquid droplet populated putrefactive bacteria. Under their influence, the fruit body tissue decompose and it is accompanied by an unpleasant odor, it is easy to see at the entrance to the heavily infested room. 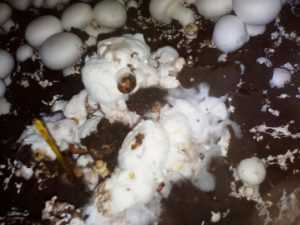 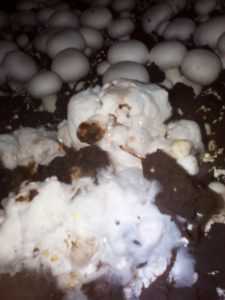 The area of ​​infection depends on:

No need to give mikogonu grow big. When you see on the shelves of fungi infected with the fungus, it is necessary to remove them. Remove them should not be pickers during the harvest (they are then at risk of becoming a source of further infection). Pickers in turn, should be easy to identify Mikogon – firstly, that it did not touch it, and secondly, to notify the foreman of his presence. Collect all diseases have specially trained people (health unit). If there is no health care, before or after the collection of mushroom gathering a few people need to identify who will clean the infected mushroom. After this operation, all the clothes must be washed in hot water and a maximum disinfected.

Collect the affected mushrooms need a very ostorozhno.Dlya order to safely remove mikogon the shelf next technique is recommended. Disposable plastic bag is worn on special accommodate made of plastic pipes (the diameter of 150 mm.), And then adapt this mikogon “pulled” to the compost. Package tied in sptsialnom container or large plastic bags all taken out and disposed of. Thus, the outer side of the package remains clean, no contact with the hand, and the number of spores caught in the air – is minimal. The place where the disease has been removed pour liquid lime or gypsum to sleep. Salt is not desirable because when watering it will scatter in different directions and later on mushrooms appear yellow spots. 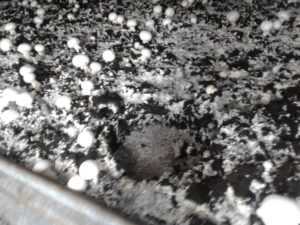 Attention – even if the infection is large, in any case, do not collect mikogon in a bucket or box, ignoring the above recommendation. If you do so, the number of spores in the air mikogona will be so great that it will infect and all camera and clothes of people who did – and he, in turn, hallway and other rooms.

It is important to minimize the spread of spores mikogona the enterprise! Before unloading the camera to be treated with steam is not less than 12 hours at 68 degrees and wash thoroughly, including klimatustanovki. If the lights are removed before steaming, and then thoroughly washed and disinfected. When there is no possibility of steamed growing room: first, it can be discharged earlier, when the spread of the disease is not so much, and secondly, to try before unloading to remove from the shelves maximum number mikogona the manner described above, in the third place, it is desirable to treat the shelf disinfectant. After unloading, a thorough washing chamber and air conditioning systems, to disinfect. Disinfection is carried out with a solution or Disolita virotsida and their analogs. There are various special gun (foggers). First produced in blowing-deztumanom recirculation channel enabled fan, the fan stops and then processed by the entire room.

The most effective way to combat the spread of secondary Mikogona is only steaming! disinfectants processing though and helps reduce the risk, but not very effective.

It is strictly forbidden to make watering until harvested mikogon! When watering of infected fungi in the air raises a large number of spores and the rapid spread of the disease is guaranteed.